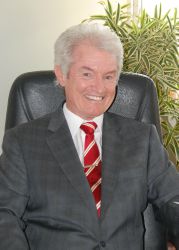 John Glynn was born in May 1945. He has a strong Legal background. His Great Great Grandfather was Tom Walshe, Solicitor of Loughrea, County Galway and affectionately known as “Honest Tom Walsh”. One of his Grand Uncles was Sir Joseph Glynn who was a Solicitor and a prominent participant in Irish public life in the early part of the 20th century. Sir Joseph, among other things, directed the Society of St. Vincent De Paul for many years and wrote a book on the life of Matt Talbot. Another Grand Uncle was the Honourable Patrick MCM Glynn, former Minister for Home and Territories and Attorney General of Australia. John Glynn commenced studying Law in 1964 at UCD. While in the College he was joint founder of the UCD Branch of Amnesty International and later it’s President. He also co-founded the TCD Branch of the same Organisation.

He was articled to his cousin Patrick Glynn of Nassau Street and qualified as a Solicitor in 1968 and with the benefit of an honours LLB Degree from UCD. Experience was the order of the day then as it is now and he worked for four years with three different Firms culminating in the opening by him of the first Legal Firm in Tallaght in May, 1972 under the Title of “John Glynn and Company”. The Firm was originally located in the Ulster Bank’s Premises at Main Street, Tallaght and his only Staff were himself and his wife Jacinta. The Firm, however, increased considerably since then . Tallaght in 1972 had a population of 7,500 people and was a small Country Village. John Glynn and Co., in that era, engaged mostly in Conveyancing, Wills and a small amount of Civil Litigation. In 1995 the Firm moved to where it is now located at Law Chambers, The Village Square. Personal Clients were always the primary concern of John Glynn and this is reflected in the fact that a significant number of his Clients are fourth generation being great grandchildren of those who stepped into his Office in 1972. He also has a keen interest in technology especially in the Legal field and is credited with having the first “Lawyer” website in Tallaght and one of the first in the Country. The site ranks well on google rating and can be accessed at www.solicitor.net In keeping with his desire to serve all groups in Tallaght he has also engaged with the new Nationalities who have arrived here in the last few years and their languages are well represented on the Firm’s website. He has also developed for use by his Irish and non Irish Clients several Apps which can be down-loaded on both I Phone and Android systems free of charge. There are in addition to the Irish version, Polish, Lithuanian, Slovak and several others on the way. The Apps developed by John Glynn constitute leading edge technology and are in many cases world firsts. John Glynn attributes much of his success in technology to the several years spent by him as Chairman of the Technology Committee of the Dublin Solicitors Bar Associaton. This Organisation is a grouping of Dublin Solicitors and is the second largest Organisation of Lawyers in the Country. John Glynn was the President of this Organisation for the year 2012/2013.

If you ask John Glynn has he any intention of retiring he will tell you his Clients are his main concerning and he hopes to be with them for another thirty years and at least until the 5th generation.